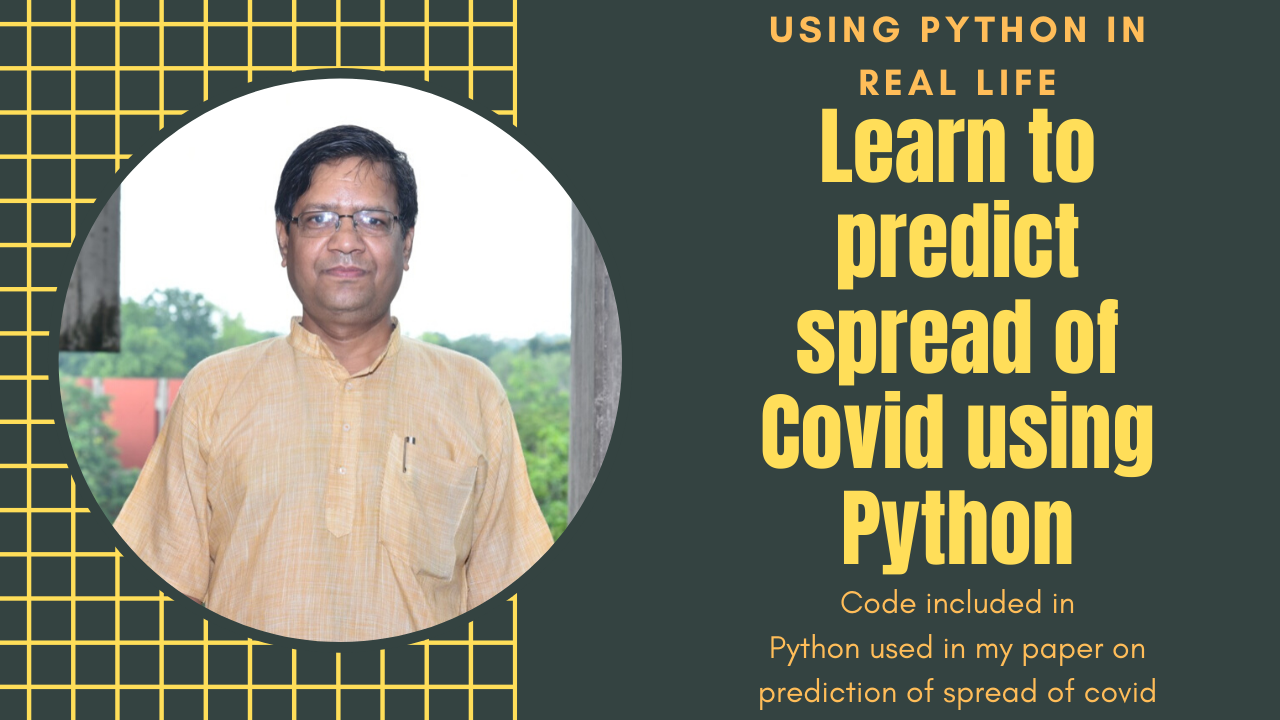 The world is witnessing a never-seen-before pandemic of COVID-19, a disease caused by a novel coronavirus called SARS-CoV-2. This is a very contagious virus; it has spread rapidly globally in just about 100 days. Countries all over the world are grappling with the increasing numbers of infected individuals and deaths, and India is no exception. Although China’s Wuhan is thought to be the epicentre of the pandemic, after implementing a variety of measures to combat it, the country is now seeing brighter days with no new cases being reported in the recent past and normalcy being slowly restored. South Korea has shown the world how aggressive testing can help keep the number of infected cases in check. Now, every country is aspiring to ‘flatten the curve’ or see a steady, manageable growth of infections such that their healthcare infrastructure is not overwhelmed. In reality, very few have scratched success here.

Since the virus spreads through respiratory droplets, a highly recommended guideline to flatten the curve is to practice physical distancing, i.e. staying away from each other by about a metre or more. However, how do we know if we are flattening the curve? In the media, the signature for flattening is reported to be when the number of new cases does not increase with time.  But, can we be more precise in the assessment for approach to flatten the epidemic curve?

In a recent effort, my colleagues Soumyadeep Chatterjee and  Ali Asad, and I at the Indian Institute of Technology, Kanpur, have worked on answering this question. Instead of the prevalent notion of ‘flattening the curve’, we argue that the transition from the exponential growth of number of cases to a power law growth can be treated as a signature for the same. The power law regime, a unique feature of COVID-19, occurs possibly due to the transmission by asymptomatic carriers. These are infected individuals who show mild or no symptoms. Such carriers unwittingly spread the infection far away. This also leads to a longer duration of the epidemic. In our work, we illustrate this using data from China as an example. 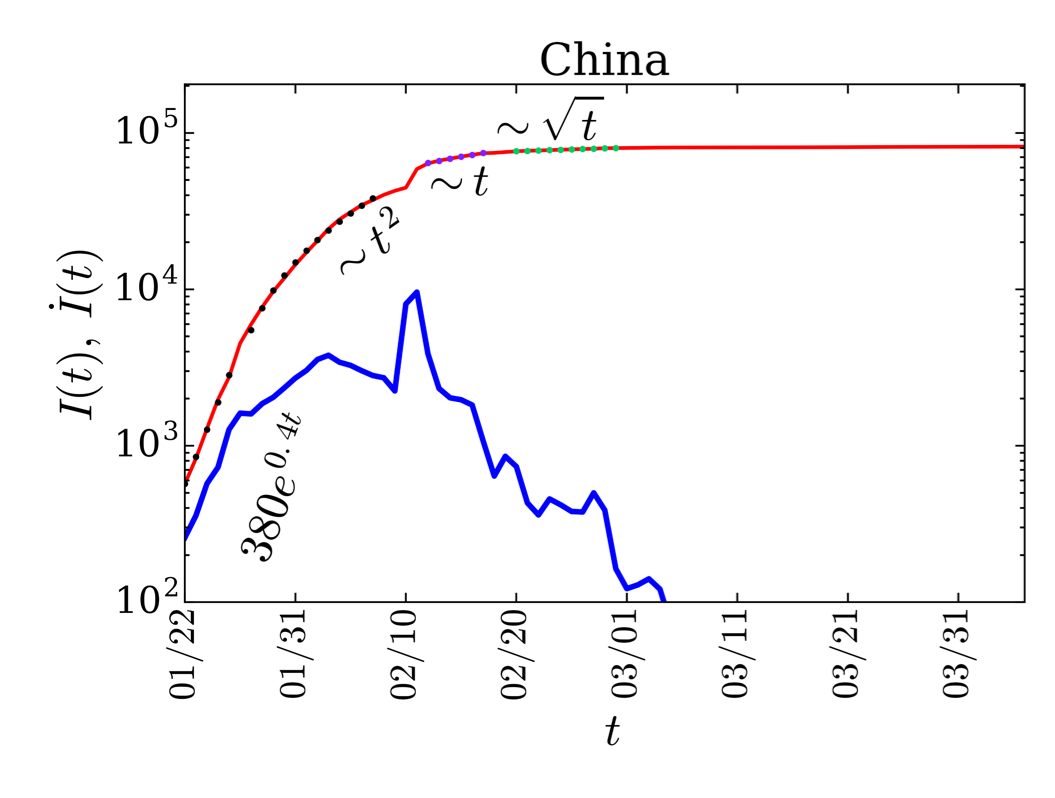 In Figure 1, we illustrate the total count of the infected individuals for China using the red curve, and daily count using the blue curve.  From January 22 to January 30, the number of infections rose exponentially, which is represented mathematically as e0.40t. The variable ‘t’ represents time. But after January 31, the count rose as a quadratic (t2), which is less dangerous than the exponential growth. According to us, this was the turning point. As seen from the figure, from February 14 onwards, the red curve follows a linear trajectory.  During this time, the number of daily new cases remains constant. After that, the curve flattens gradually. 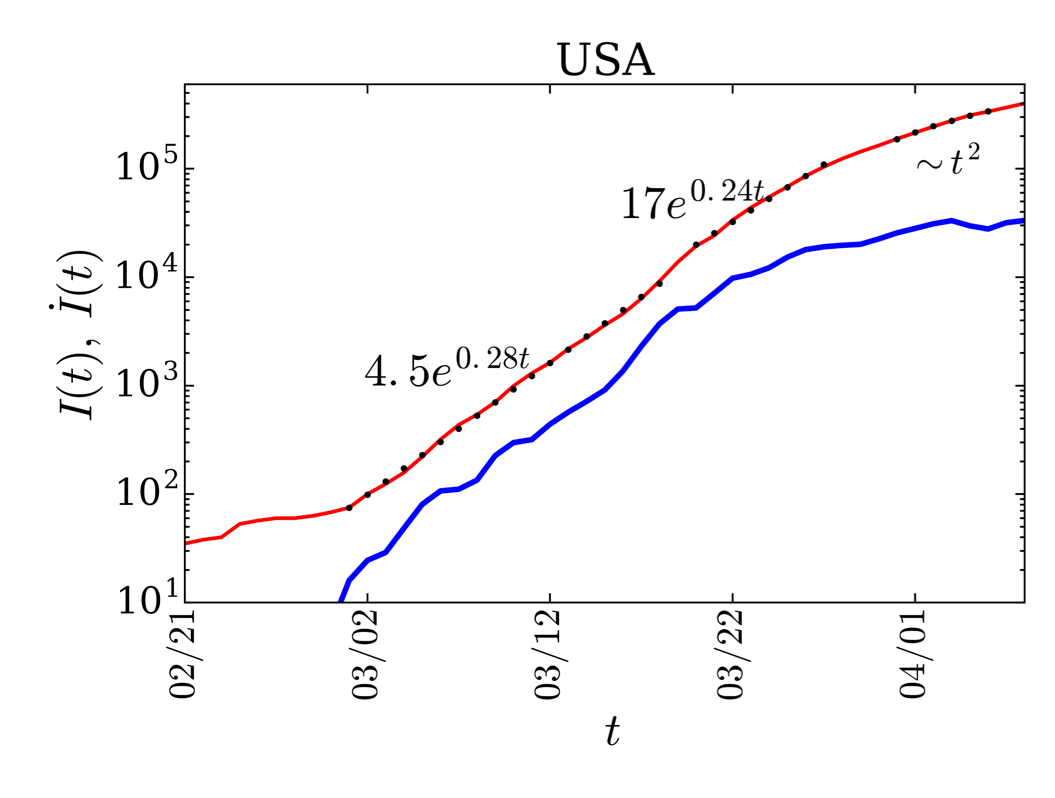 In Figure 2, we plot the number of infected cases for the USA.  After two terrible exponential-growth regimes, the red curve is beginning to show a quadratic (t2) behaviour.  The blue curve has become almost flat, indicating that the number of new cases is approximately constant.  Thus, the USA is getting to the flattening of the curve.  But, it may still be some distance away from the flat regime.

Now, looking at the curve for India in Figure 3, we find that the number of new cases (even though very high) have become approximately constant since April 1.  Hence, we have reached the linear regime (proportional to t). A big question is whether we will flatten from here. If the current practices of lockdown and reducing physical contacts remain, then it is possible that we will flatten sooner than later. Strict lockdown imposed very early may be the reason for such behaviour.  If the curve starts to bend further (towards the square root of t) from here, then we will reap the benefit of a hard but quick lockdown imposed in India. A word of caution is in order as we need to wait for some time to see a clear trend. 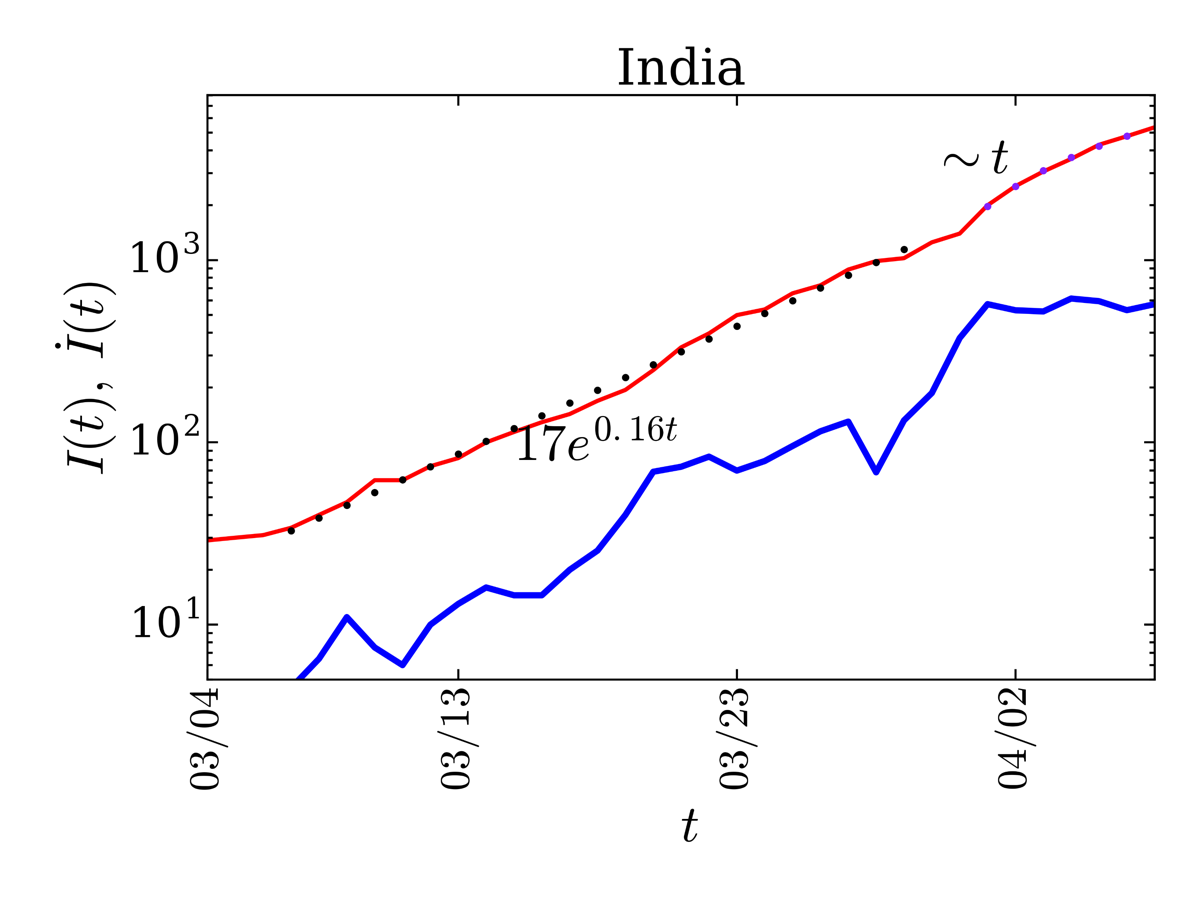 In summary, we are trying to decipher the flattening of the epidemic curve.  We hope that the above method indeed works, and our predictions are correct. Till then, let us wait for the curve to flatten.